The last couple of years many dairy farmers are convinced of the advantages that Silage Safe offers.

Below you will find a summary of a number of dairy farms that are convinced of the many advantages of the Silage Safe sealing system. The fast, efficient and laboursaving way in which the system makes it possible to open and close the silage were the reasons for these dairy farmers to choose for the Silage Safe system.

The  map below contains a summary of sold Silage Safe systems across the world. Do you like to visit a dairy farmer in your area to ask about their experience with Silage Safe? That’s possible! Please feel free to contact us/our dealers for more information.

Would you like to know more about Silage Safe? We are happy to give you advice!

Contact us
Maps were disabled by the visitor on this site.

With his wife, Xaviar Renard runs a dairy farm which also has a poultry branch. In 2013 he started the construction of a new dairy stable, which was taken into use halfway 2014. The stable offers room to 140 dairy cows. In 2013 two trench silos were built, after which several more trench silos followed in 2014. All these silos have been equipped with the Silage Safe sealing system in 2013 and 2014.

Watch the video at the side and be convinced of this smart silage system. 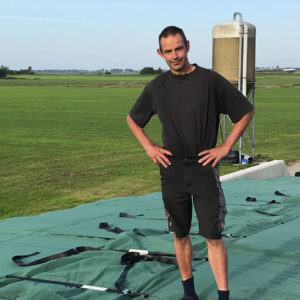 “It’s very easy and fast to work with Silage Safe  in combination with filling the silo in layers. The sheets were already installed during the first cut, so this cut we only had to open the pit by putting the sheets over the walls. And for closing we only had to put the sheets back on the silage again”. 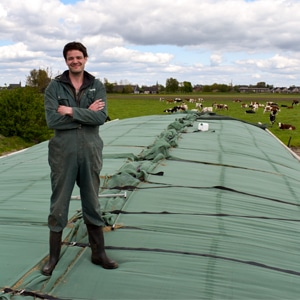 “Because the Silage Safe drains the water on the inside of the silos, we only had to us one wall between our silos. The rainwater is being drained perfectly out of the silo’s”.

Below you will find a impression of the Silage Safe sealing system.

“If I want to cover my new silo of 80 meters with sandbags and tires it takes me a few hours. Now that I use the Silage Safe system I am able to cover the pit within an hour. Furthermore, opening the pit is much faster and applying a second cut is much easier.”

“We have a silo with a single dividing wall. Before the main problem was that water always leaked into the silage. We also ran out of tires for covering the pit. After looking at different options we chose Silage Safe. The drains at the bottom of the pit work perfectly and we don’t need tires anymore.”

“Covering the silage has become more pleasant. First you have to take some time to prepare everything well, but when all sheets are been installed and the silage has been compacted, covering of the silage is very simple and easy. The simplicity of the system is quite amazing”.

Silage Safe makes it possible to cover and uncover your silage in a quick, efficient and labour saving way. This provides optimal conservation and a high quality silage without any losses.